383. How You Can Be the Winner of the PHP Innovation Award of the Year in 2022 - Lately in PHP Podcast Episode 91
383. 10 Pieces of PHP Developer Advice in 2022: Advice #3: Share Reusable Classes with Simple Documentation and Example Code - 3 minutes - Lately in PHP Podcast Episode 90 Part 3
385. There Is a (PHP or JS) Class for That: Community based Best Package Recommendations
385. Notable PHP package: Move Me GIF
385. The Family of Core Developer of CakePHP and Lithium PHP Frameworks Needs Our Urgent Help

In a few days the final results of the PHP and JavaScript Innovation Awards of 2014 will be announced.

Each winner will receive as prize a nice PHP elePHPant plush toy and, starting this year, a beautiful physical trophy as symbol of the recognition deserved by the authors for being so innovative.

Read this article to see the first pictures of how the winner trophies look like and how you can get your own trophy submitting innovative classes.

Recognition for the Innovation Award Winners of the Year

Many Trophies to Many Authors of the Winning Country

How to Win the Innovation Award 2015 Prize and Trophies?

Recognition for the Innovation Award Winners of the Year

The PHP Programming Innovation Award is an initiative launched in 2004 by the PHP Classes site with the goal to encourage authors to submit packages that are innovative. The idea is to promote packages that would be more useful than others that are for the same purposes of others already submitted to the site.

Since the beginning the site gives away to the nominees prizes provided by sponsors but the real values that the site provides to the nominated authors is the public recognition for sharing useful programming components that probably no other developer shared before.

Therefore since the Innovation Award of 2007 the PHP Classes site started giving away a special prize too for the winner that accumulates more points throughout the year: the elePHPhant PHP mascot plush toy. Meanwhile, since the Innovation Award of 2011 the PHP Classes site changed the mascot prize to a different model. Previously the prize used to be based on the original model based on Vincent Pontier design.

Starting with the award of 2011, the prize is also a mascot elePHPant plush toy, but this time it is based on the design of Ifat Amit of InterGraphicDESIGNS that won the contest for the new design for the site in 2010.

This is a special design created for PHP Classes only. This mascot plush toy is not available for sale. Only the winners will get this mascot prize. 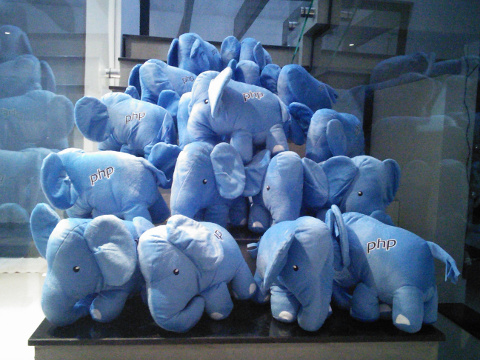 Starting this year, not only the winners will get this mascot prize, but they also will get a trophy that provides visible recognition and shows what the winner has won by the means of titles written in the trophy itself.

This is a very beautifully designed acrylic trophy that includes the symbols of PHP Classes, including the logo of the site, the logo of the award and the elePHPant drawing.

Since the same award is going on the JS Classes site too, winners of the JavaScript Innovation Award will also win similar trophies.

At the time of this writing the trophies are being produced, so for now here you may only see a picture of the prototypes of the trophies.

Obviously this prototype does not do justice to the beauty of actual physical trophy the winners will receive in their own houses. The main difference is that the trophies are done in acrylic which is a brilliant and transparent material.

Also in this picture does not show how personalized the trophies will be. The final version will have engraved the name of each winner, as well the title that he earned and the year of the award. 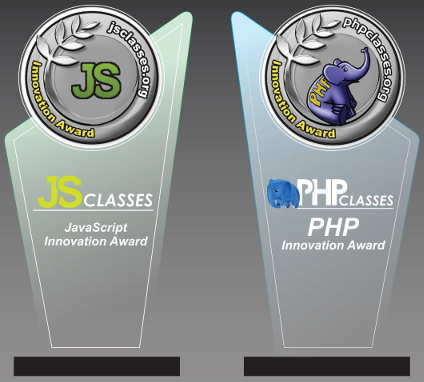 Many Trophies to Many Authors of the Winning Country

This year the innovation award initiative got more interesting. Not only there will be one individual winner of the award, but there is also a prize for all the nominated authors of the country that wins the Innovation Award Championship by Country.

Each country winner will get his own trophy personalized with their own name and the name of the country their won.

How to Win the Innovation Award 2015 Prize and Trophies?

The winners of the Innovation Award 2014 edition are about to be announced after the voting on the nominees of December ends in January. Another post will be published to announce the winners. The winning authors will be invited to give interviews and tell about them and their work that allowed them to win the award.

After that the Innovation Award 2015 continues. Actually it already started, as the nominees of January 2015 will be announced in February.

If you have developed any innovative classes, you can already submit them to the site so you can qualify to earn the monthly or annual prizes and recognition that the site provides with this initiative.

If you would like to participate but you do not have any ideas for innovative packages to submit, you can check the Featured Requests section of the package recommendation system launched on the PHP Classes and JS Classes sites in 2014.

There you may find many requests for packages that do not have yet a solution, so the first author that submits a package for each of those problems will certainly be nominated for the innovation award.

Keep in mind that the innovation award initiative is also going on in the JS Classes site. So you if you submit innovative packages there, you may also win prizes, trophies and public recognition.

Just post a comment to this article if you have questions or other comments about this initiative.

No comments were submitted yet.